What a weekend! Another Comicpalooza has come and gone, leaving your humble writers at Fanspeak Files with unforgettable memories and hearts longing for next year. Bekah and I have been attending the convention for several years now, and it is always such a pleasure seeing the positive growth and expansion of the event.

Speaking of expansion, construction was in full swing at the George R. Brown Convention Center, but the Comicpalooza team didn’t let the renovations rain on their parade. The signage and entryways throughout the convention were clearly marked, and spirited volunteers were readily available for any questions or problems. The event’s organization felt much improved from previous years, setting the stage for a structured and well-planned weekend.

The Fanspeak Files Comicpalooza Bingo challenge was a hugely entertaining way to explore the convention, and you can see from our Twitter feed that we met a lot of creative characters along the way. Thank you to everyone who joined in on the fun!

We quickly checked off our Cosplay Power Couple square with Megara and Hercules: 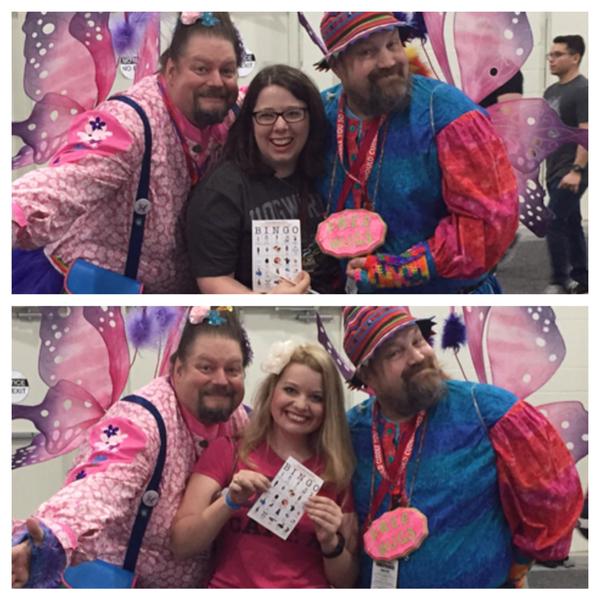 And Hawkeye saving the day with this sleek bow and arrow:

We LOVE LOVE LOVE seeing the phenomenal cosplay at Comicpalooza, but we were a little bummed that no Sims showed up with a plumbob. Maybe next year?

The wonderful thing about Comicpalooza is that there is truly something for everyone. We had a magical time in the Jason Isaacs panel learning how he carefully crafted his film roles such as Lucius Malfoy in the Harry Potter series. Bekah racked up some serious points on the vintage pinball machines and Fix-it Felix, Jr. in the classic arcade section. (I played the part of Wreck-it Ralph: *ehem* “I’m gonna WRECK IT!”)

We spent hours perusing the Artist’s Alley and playfully scoping out celebrity booths to spot the famous faces, including the MARVELous Stan Lee. In addition to the traditional programming, we loved seeing science take a starring role with booths featuring rocketry, robotics, 3D printing, and other cutting-edge technology.

Overall, it was a highly entertaining weekend with unforgettable moments around every corner. Our Comicpalooza weekend may be over for now, but we’re counting down the days until we can do it all over again!

One thought on “Comicpalooza Reviewza”